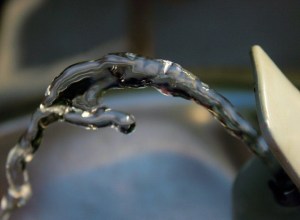 Yesterday I expressed some concern over interpreting passages of Scripture in light of very specific and localized contexts. Believe it or not, it matters not only in how we interpret but also what and how we apply Scripture. Let me use a passage I’ve become quite familiar with as an example.

In Revelation 3 Jesus threatens to spit the Laodicean church out of his mouth because they are lukewarm. Not a pretty picture. In fact, the picture that is painted of Laodicea is uniquely bad – they are the only church in Revelation 2-3 to which Jesus does have some word of praise. But what does it mean that the church is lukewarm?

The traditional interpretation was that Jesus wished the church was either passionately for him (hot) or entirely indifferent in unbelief (cold). Frankly, this interpretation shipwrecks on the fact that in the passage, both cold and hot are cast in a positive light (Jesus’ wishes they were either cold or hot, implying either is a good option). This could hardly be the case if cold meant indifferent unbelief. Also, the context doesn’t seem to favor this interpretation because the imagery is of Jesus drinking the hot and cold water and spitting out the lukewarm water. The therapeutic value of the hot springs in Hierapolis was gained from bathing in them, not drinking them (it was actually deemed undrinkable).

Other interpreters connected this criticism of lukewarmness with the Laodicean water supply which was piped in via aqueduct from a distance of six miles from the south. When the water reached the city it would be neither hot (if taken from a hot spring) nor cold (if taken from a cold spring). This position is strengthened by the existence of well known hot spring that were of therapeutic value in the city of Hierapolis, just to the north of Laodicea. Also, there were refreshing cold spring is the city of Colossea just to south. Sadly, the Laodiceans had neither, but were forced to drink lukewarm water. Based on this interpretation amounts to calling the Laodicean church useless. They are neither therapeutic nor refreshing, and Jesus wishes they’d be one or the other because then they’d at least be good for something.

This interpretation, however, also suffers some serious flaws. First, there is no indication that the Laodicean water supply was deemed unfit or even unpleasant to drink based on the temperature of it (it was very hard – see picture of the calcification on the aqueducts). In fact, based on several pieces of archaeological evidence, the water was deemed “sweet” and of “good complexion”. Strabo, and ancient geographer/tour guide actually seems to have preferred the water of Laodice to that of Hierapolis, referring to Laodicea’s as ‘drinkable’ (implying Hierapolis’ was not). Second, many cities got their water from an aqueduct system, including the cities of Ephesus, Smyrna, Pergamum and Sardis. Its a leap to suggest that the Laodicean water was someone more lukewarm than these other cities water.

Another knock against this interpretation is that it is so tied to the local context that only those who lived in or had visited Laodicea would understand the message. That truly does undermines the clarity and perpescuity of Scripture.

There is a better interpretation that has been offered. It is based on cultural norms that were much more common and even common today. Some have suggested that Jesus’ words refer to the very common practice of drinking hot drinks in the winter and cold drinks in the summer. Huh, imagine that – Jesus drawing imagery from every day life. There is actually quite detailed instructions from New Testament times (and even earlier) for how to heat and cool wine for serving, depending on the temperature. When wine wasn’t the drink, one would drink hot or cold water. Interestingly, Plato (4th century BC) even comments on this, “when thirst is accompanied by heat, then the desire is for a cold drink; or, if the thirst is accompanied by cold, then the desire is for a hot drink”.

Ok, so now to the so what. If we interpret Jesus’ words in light of common everyday drinking practices, what does it mean? What is Jesus condemning the Laodicean church for exactly? in essence, they are being condemned for blending in to the crowd. Hot drinks are desirable on cold days because the stand in stark contrast to the environment. Cold drinks on hot days for the same reason. The Laodiceans didn’t stand out from the culture in any significant way, so they were not at all refreshing. They were too worldly to be of any good to the world.

Understood in this light, this passage indeed does have a lot to say to the modern church, especially in the west. George Barna has said that never before have so many people professed to be Christians and never before has it made so little difference. Why? Because we who profess Christ don’t look or act any differently. In a lecture I heard him sum up the situation that if you followed your average church going evangelical around six days out of a week, you’d see little to no difference between them and their secular neighbors.

Scary stuff. The threat to the Laodicean church, and to every other lukewarm church, is threatening indeed. Jesus will not tolerate in cognito Christian churches.

One thought on “Context and Interpretation, the Laodicean church”

I have been married to the same incredible woman for almost 24 years. I am the father to three great boys who surprise me every day. I serve as the pastor of adult ministries at Christ Community Church (formerly Evangelical Community Church) in Bloomington, Indiana (though the views expressed on this blog are not necessarily thoseof the church or its leadership as a whole). I consider myself evangelical in the historic sense of the word. I prefer the term Confessional, though the irony is I don't minister at a confessional church. I'm reformed, with sympathies for high church and sacramental Christianity. My theological heroes include Edwards, Nevin, Calvin and Machen. You can read more about me in my bio
%d bloggers like this: