“And he [Lord Asriel] invited us to join him, sister. To join his army against the Authority. I wished with all my heart I could pledge us there and then. He showed me that to rebel was right and just, when you considered what the agenst of the Authority did in His name…And I thought of the Bovangar children, and the other terrible mutilations I have seen in our own southlands; and he told me of many more hideous cruelties dealt out with the Authority’s names – of how they captured withces, in some worlds, and burn them alive, sisters. yes, witches like ourselves…He opened my eyes. He showed me things I had never seen, cruelties and horrors all committted in the name of the Authority, all designed to destroy the joys and the truthfulness of life.” – from the Subtle Knife by Philip Pullman

So far we have noted that many people reject the idea of God because 1) they desire a greater moral autonomy, to be liberated from what they see is a repressive system of morals, and 2) religion has often been used as a tool of those in power to oppress – religion (Christianity) has at times become part of the establishment. The quote above from second book in Pullman’s “His Dark Materials” trilogy brings us to the third reason people often reject religion and the idea of God.

3. Many, it seems, reject religion and the very notion of God because it has been the cause of great violence and suffering. This seems to be the strongest motive for the ‘new atheists’, men like Sam Harris (Letter to a Christian Nation), Richard Dawkins (God Delusion) and Christopher Hitchens (God is not Great). All of these thinkers at some point argue that belief in God leads to terrible violence, is dangerous and needs to be ‘cured’ for the sake of humanities survival (all also share a hatred for the God of the Old Testament, but I’ll probably treat that topic separately). 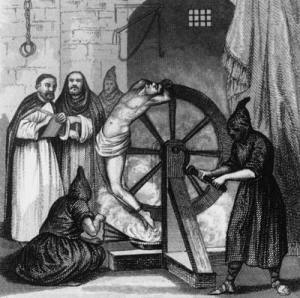 This line of reasoning is not, however, new. La Mettrie wrote in 1748, “If atheism were generally accepted, every form of religion would be destroyed, and cut off at its roots. There would be no more theological wars, no more soldiers of religion – such terrible soldiers!” (quoted in McGrath, pg. 33). Sam Harris asserts, “Christians have abused, oppressed, enslaved, insulted, tormented, tortured, and killed people in the name of God for centuries, on the basis of a theologically defensible reading of the Bible” (Letter to a Christian Nation, pg. 23). Earlier in the same book Harris expresses dismay over the failure of evolutionary science to stamp out the idea of God creating. This ‘stupidity’ coupled with America’s great power as a nation, is, according to Harris, incredibly dangerous. He writes, “Our county now appears, as at not other time in her history, like a lumbering, bellicose, dim-witted giant. Anyone who cares about the fate of civilization would do well to recognize that the combination of great power and great stupidity is simply terrifying, even to one’s friends” (pg. xi). Amazingly, he claims “Martin Luther and John Calvin advocated the wholesale murder of heretics, apostates, Jews, and witches” (pg. 12).

Dawkins shares Harris’ fear of belief. In his chapter “What’s wrong with religion? Why be so hostile?” he catalogs the atrocities committed by religious zealots in Afghanistan and Pakistan, including the execution of blasphemers and converts to Christianity. He also holds up the attitudes/actions of extremists from the Religious Right, ‘the American Taliban’, as evidence of the nastiness and violence fostered by religion and a belief in God. He writes, “They [politicians] characterize terrorist as motivated by pure ‘evil’. But they are not motivated by evil. However misguided we may think them, they are motivated, like the Christian murderers of abortion doctors, by what they perceive to be righteousness, faithfully pursuing what their religion tells them. They are not psychotic’ they are religious idealist who, by their own lights, are rational” (God Delusion, pg. 344).

Both Harris and Dawkins anticipate our objections. We say, “Oh, but those are just the nut jobs. There are many moderate, non-violent people of faith”. Dawkins argues that ‘sensible’ religion makes the world safe for radical fundamentalism by “teaching children, from their earliest years, that unquestioning faith is a virtue” (Delusion, pg. 323). Harris writes, “I have little doubt that liberals and moderates find the eerie certainties of the Christian Right to be as troubling as I do. It is my hope, however, that they will also soon begin to see that the respect they demand for their own religious beliefs gives shelter to extremists of all faiths” (Letter, pg. ix).

The idea that faith is the enemy of peace finds its way into popular sentiment also. John Lennon’s song “Imagine” is the perfect example:

With the rise of religious extremism it is no wonder that this has become one of the prime motivations for people rejecting the idea of God. This is an objection that Christians should take very seriously (as we should the other also). There is much we must own up too, confess and repent of. Of that there is little or no doubt. Yet, and here is another preview of a response, have Dawkins and Harris forgotten the atrocities committed by the Stalinist regime? Were these committed in the name of God? No, quite the contrary.

One thought on “why people are atheists, part 3”