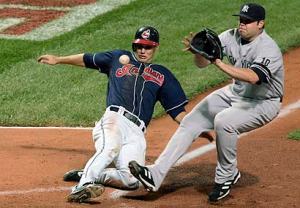 Tonight, it was a little reminiscent of the plagues God sent against Egypt. In the 8th inning, the Indians were down 1-0, having squandered many opportunities to score. Then, a swarm of bugs descended upon Jacob’s Field, flying in players eyes, noses, mouths, ears, etc. The games was delayed while players, coaches and umpires sprayed down with bug spray. It didn’t work, at least not for Joba Chamberlin. The pitcher hit a batter, walked two, and threw two wild pitches – one which allowed Grady Sizemore to tie up the game on a close play at home.

The Indians would go on to win the game in the 11th inning – showing that not only can the outslug the Yankees, they can outpitch them. The plague of flying insects certainly helped, and is just further confirmation that the Yankess are the evil empire and God is on the Indians side!