>Tougher to be a Christian in a University This Week

>In the past two weeks it has become more difficult to be a Christian on a secular campus (like it wasn’t hard enough). I’m sure many of you have seen these news reports, but in case you haven’t, they are worth taking a look at.

First, in MI, Julea Ward lost her law suit against EMU. She was expelled from the graduate program in counseling because of her views on homosexuality. From the Catholic News Agency article:
“Julea Ward enrolled in the university’s counseling practicum course in January 2009, and was assigned to a client who sought assistance with a homosexual relationship. Ward considered herself unable to assist the client under the circumstances, due to her own moral and religious beliefs, and was advised by her supervisor to reassign the client. Eastern Michigan University, however, responded to the situation by initiating disciplinary procedures against Ward, involving a “remediation” program. According to ADF, the “remediation” amounted to an ultimatum: Ward would either “see the error of her ways” and change her beliefs about sexual morality in order to encourage her clients in same-sex relationships, or be dismissed from the counseling program.”

You can also read about Julea’s case and reaction to her suit being dismissed in this FoxNews article.

A very similar case is before the courts in GA. Jennifer Keeton was also dismissed from a graduate program in counseling for her views on homosexuality. She was told that she would need to undergo a remediation program and sensitivity training. Going through the programs, however, wouldn’t be enough – she would have to write a paper on how her views have changed. You can read about Jennifer’s case in the Chronicle of Higher Education and also in this FoxNews article.

In both the above cases, it’s not just the school policy that is in conflict with the Christian views of sexuality and causing problems for these students, it’s also the Code of Ethics for the American Counseling Association. 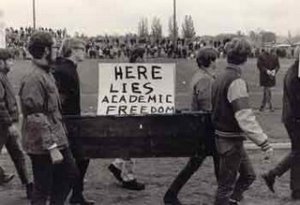 Another case involving a university, religion, homosexuality and academic freedom is unfolding in Illinois where a professor of Catholic studies was ousted for sharing the Catholic Church’s view on homosexuality. Kenneth Howell, an adjunct associate professor (whose salary is paid for by the local Catholic diocese!) was fired after explaining in a class and in a subsequent email why the Catholic Church believes homosexuality is a sin. Howell taught two classes on the UI campus – Introduction to Catholicism and Modern Catholic Thought. I’m not sure in which class the discussion came up, but it was a class on Catholicism, and he was explaining the Catholic Church view (which is also, coincidentally, his own)! How’s the classified add going to read for his vacant job: “Wanted: professor who knows what Catholic’s believe but doesn’t believe it himself.” You can read about Howell’s case in the Chicago Tribune and in the News Gazette.

Anyway, some important legal stuff to keep an eye on. The cases really make me appreciate 1) Christian universities, and 2) those faithful Christians who enter the secular university knowing the challenges.